Posted on 15 December 2014 by Cedric Ryngaert
in: Categories: Blog.

Jaloud v. the Netherlands: European Court of Human Rights finds the Netherlands liable for failing to adequately investigate the use of lethal force by Dutch troops in Iraq 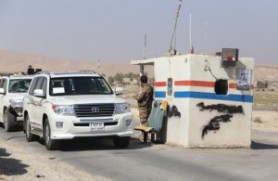 On 20 November 2014, the Grand Chamber of the European Court of Human Rights (ECtHR) in Jaloud v. the Netherlands held that the Netherlands had failed to adequately investigate the circumstances surrounding the death of an Iraqi citizen allegedly killed by a Dutch lieutenant at a vehicle control point in Iraq in 2004. As participants in the Stabilization Force in Iraq (SFIR), Dutch troops had been present in southeast Iraq between July 2003 and March 2005, under the command of an officer of the United Kingdom, which was at the time the occupying power in the area. The Dutch soldiers involved in the incident at issue, which took place in April 2004, had been called in to help the Iraqi troops manning the vehicle control point. When a vehicle approached the control point at high speed, soldiers, including the Dutch lieutenant, opened fire, as a result of which one of the car passengers was killed.

In October 2008, the deceased’s father filed an application with the ECtHR, complaining that the Dutch authorities had, in his view, failed to adequately investigate the case. The Court largely sided with him, and held that the Netherlands had failed to meet its procedural obligations under Article 2 of the European Convention on Human Rights (ECHR), which enshrines the right to life. In particular, according to the Court, the Netherlands had failed to make important documents available to the judicial authorities and the applicant, had not taken precautions to prevent the lieutenant from colluding with other witnesses, had not properly carried out the autopsy, and had mislaid material evidence (para. 227). The Court went on to order the Netherlands to pay the applicant EUR 25,000.

In this post I will not reflect on whether the Court was correct in holding the Netherlands responsible for a violation of Article 2 ECHR. Rather, I will address the prior question as to whether the Netherlands actually had any obligations towards the applicant under Article 2 ECHR in the first place, a question that the Court dealt with at length in paragraphs 109-146. To answer this question, the Court had to establish that Jaloud fell within the jurisdiction of the Netherlands under Article 1 ECHR, which provides that ‘[t]he High Contracting Parties shall secure to everyone within their jurisdiction the rights and freedoms defined in Section I of this Convention’. As the incident happened outside of the Netherlands, the jurisdictional issue in essence revolved around the geographic reach – or: the extraterritorial application – of the ECHR.

Before Jaloud, it was not contested that the ECHR, and Article 2 in particular, could, in certain circumstances, apply outside the territory of a Contracting State. This occurs notably where that State exercises ‘public powers normally to be exercised by a sovereign government’ (Al-Skeini and Others v. the United Kingdom (2011), para. 149), including where the State holds individuals in custody (Hassan v. United Kingdom (2014), para. 76). Such powers could be exercised even if the State was not in effective control of the area, provided that the individual was within the physical power and control of State agents, such as soldiers (Hassan, paras. 75-76). However, as both in Al Skeini and Hassan, the State (the UK) occupied the relevant area – in the sense of belligerent occupation pursuant to Articles 42 to 56 of the Regulations concerning the Laws and Customs of War on Land (The Hague, 18 October 1907; “the Hague Regulations”) – the applicable jurisdictional standard appeared to be a hybrid of the State agent control model and the territorial control model. It remained somewhat unclear whether foreign individuals could fall within the jurisdiction of a State which did not occupy foreign territory, such as the Netherlands in Jaloud; Dutch troops merely assisted an occupying power – the UK – and were under the command of a UK officer.

The Court has now clarified that individuals could indeed fall within the jurisdiction of such a non-occupying State: in the Court’s view, the Netherlands exercised its “jurisdiction” ‘within the limits of its SFIR mission and for the purpose of asserting authority and control over persons passing through the checkpoint’ (Jaloud, para. 152). This is a clear confirmation of the non-territorial State agent control standard: as soon as an agent of the State exercises physical control over an individual, not only by detaining him, but also by manning a checkpoint where he passes by, such an individual will fall within the human rights jurisdiction of the State, even where the State does not formally occupy the territory where it exercises this control (Jaloud, para. 142: the status of “occupying power” within the meaning of Article 42 of the Hague Regulations, or lack of it, is not per se determinative, citing case-law predating Al Skeini). It appears that in ambiguously confirming the State agent control model with respect to military operations abroad, the ECtHR has implicitly overruled its decision in Bankovic (2001), where it held that victims of a Contracting State’s extraterritorial aerial bombardment did not fall within the latter’s human rights jurisdiction (in Al Skeini, the Court could still square its decision with Bankovic, as it relied on a largely territorial public powers model of jurisdiction) .

The accountability paradigm in fact demands no less; one fails to understand why an individual who is killed by a Dutch agent in Iraq should enjoy less protection than an individual killed by a Dutch agent in the Netherlands. Indeed, as soon as there is a direct causal link between the activity of a State agent and harm suffered by an individual, the latter falls, and should fall, within the jurisdiction of the State (to which the actions of its agents are attributed). That being said, given that the public powers exercised by the State outside its territory are less intensive than those exercised domestically, it is defensible to limit the extraterritorial application of the ECHR to only some rights, in particular those relating to negative (‘do not’) obligations (e.g., the right not be killed, the right not to be tortured), and not necessarily extend it to positive obligations (e.g., the right to housing, social security, etc.). This is what the Court meant in Al Skeini where it held that the Convention rights can be ‘divided and tailored’, depending on their relevance to the situation of the individual (see also Al Skeini, para. 80, Jaloud, para. 123, describing it as ‘unrealistic’ to expect Contracting States ‘to guarantee the entire gamut of substantive Convention rights to the local population’ in Iraq).

An argument could be made to the effect that the Court’s decision may have adverse consequences for the participation of ECHR Contracting States’ troops in international military operations: if individuals affected by such operations fall within those States’ human rights jurisdiction, and if, accordingly, Contracting States may more easily be held responsible for their overseas activities, they may think twice before deploying troops abroad. This may threaten the success of international missions, and jeopardize international peace and security. In the Jaloud proceedings, such an argument – which echoes the one made against attributing wrongful acts to States contributing troops to UN peace operations – was advanced by the United Kingdom (intervening) (Jaloud, para. 126: ‘if the Court were to conclude that the Netherlands had jurisdiction in the present case, there was a “real risk” that Contracting States might in future be “deterred from answering the call of the United Nations Security Council to contribute troops to United Nations mandated forces, to the detriment of the United Nations Security council’s mission to secure international peace and security”’). These risks are speculative, however, so that the global welfare argument fails to convince. Even where some evidence could be adduced of the materiality of such risks, one may wonder whether deontological considerations should not trump consequentialist reasoning: is it not just wrong to allow States to do abroad what they are not allowed to do at home, whatever the consequences of such a determination? (see also Jaloud, concurring opinion of Judge Motoc, para. 7, holding that ‘[s]oldiers who take part in peace-keeping operations or are members of multi-national forces cannot enjoy immunity simply on account of the fact that their State is participating in such operations’).

The ECtHR has proved willing to mitigate its strict position on this matter, however, by signaling its readiness to take into account the particular investigatory challenges which Contracting States face in the heat of military operations abroad, at the level of the application of the substantive provisions of the ECHR (Article 2 in the case) rather than at the jurisdictional level (Jaloud, para. 226: ‘The Court is prepared to make reasonable allowances for the relatively difficult conditions under which the Netherlands military and investigators had to work. In particular, it must be recognised that they were engaged in a foreign country which had yet to be rebuilt in the aftermath of hostilities, whose language and culture were alien to them, and whose population … clearly included armed hostile elements.’). Such a contextual interpretation of Article 2 ECHR cannot be an excuse for messing up, however: there is always a threshold below which violations will be found. In Jaloud, the Netherlands was found not to have reached an acceptable protective threshold.

Jaloud puts the Netherlands and other ECHR Contracting States on notice, and rightly so, that insufficient investigations into the use of lethal force by troops deployed abroad may engage their responsibility under the ECHR. To prevent a finding of responsibility, Contracting States will have to invest additional resources in their extraterritorial policing and investigatory capacity. Admittedly, in the Netherlands prosecutorial reforms were put in place following the adoption of government-commissioned reports documenting cases of maltreatment of Iraqi citizens by Netherlands military personnel (Jaloud, paras. 75-89). It is hoped that these changes also extend beyond the Iraq situation (the Dutch mission in Iraq being wound up). For cases like Jaloud will belong to the past only when they are institutionally entrenched and apply indiscriminately to all Dutch military operations abroad.